What the Shell: great for the holidays! 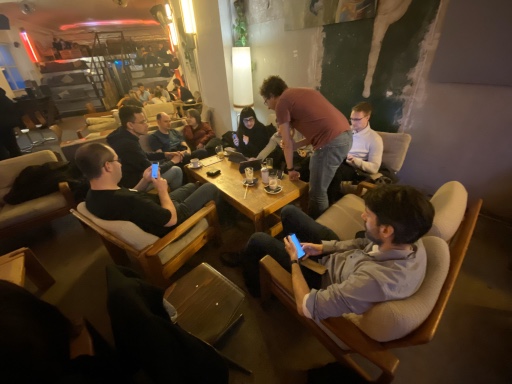 We just released What the Shell for iPhone/iPad and people are loving it! If you’re looking for something to do with the family this holiday season, consider What the Shell. This game is unique as a board game where you play at the same time and the magic comes alive when you connect two devices. There’s just something special about the mind meld that happens when you both pick the same space making an egg appear on the board. Being a board game makes it a great choice for the whole family, from older kids to your grandma. Start playing What the Shell today!

What the Shell Launch Party 2019 Playing What the Shell at an eSports bar

We were present at Join playtesting our new innovative strategic board game. The event itself was a day full of amazing talks from local multiplayer movers and shakers all over Europe, then some gaming and finally a great party in the streets playing games on a factory wall! Playing with a huge projector on the wall!

As for Ludisto’s perspective, it was a great chance to see others play our game and get their feedback. And man, did we get some great feedback! Even though we’re only in the second week of development, people already love our game. Although it looks like a simple five-in-a-row game, players play at the same time (but it’s not a speed game). There are also opportunities to make some devious captures and the simultaneous play adds a completely new twist to a classic game. In any case, we looking forward to looking at all the feedback we got to make the experience even better at our next playtest! Check out Chuck's Interview in the Lotek64

The current issue of German paper mag Lotek64 features an interview with Chuck!

He talks about what it is like to work at the Computerspielemuseum in Berlin as well as founding Ludisto, and some of our ludistic future plans.